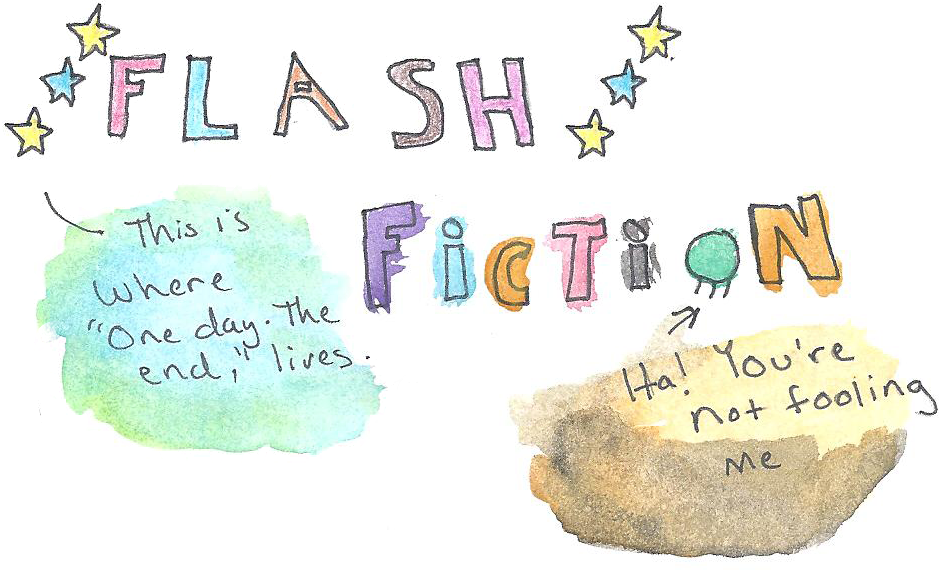 What is flash fiction?

According to Writer’s Digest:

Exact definitions can vary by specific market, but generally, complete stories of fewer than 1,500, 1,000, 500 or even 300 words can be classified as flash fiction

There is no “exact” definition for what flash fiction is as it’s different for every writer and every publication. I personally consider anything under 1,500 words ‘flash fiction’, anything over 55,000 words a ‘novel’ and anything in the middle a ‘short story’.

I’m drawn to flash fiction because it makes me feel like a runner passing a baton to a fellow runner in a relay race. In this instance the reader is the fellow runner taking an active story across the finish line. Everything is there in just a few paragraphs, the characters, the conflict, the arch, the resolution.  I love squishing everything over the lines, under the lines, and little in between. In college my fellow English majors and I spent more time writing our flash fiction pieces than we did our short stories. Its a challenge trying to find a way to say something in such a small space without saying something (Show don’t tell!). Anyway, I love flash fiction.

These are some stories I wrote in college and these three you may notice are connected to my longer short story, “The Myth of Words”. New flash fiction pieces I’ll post on my blog and you’ll find archived here. 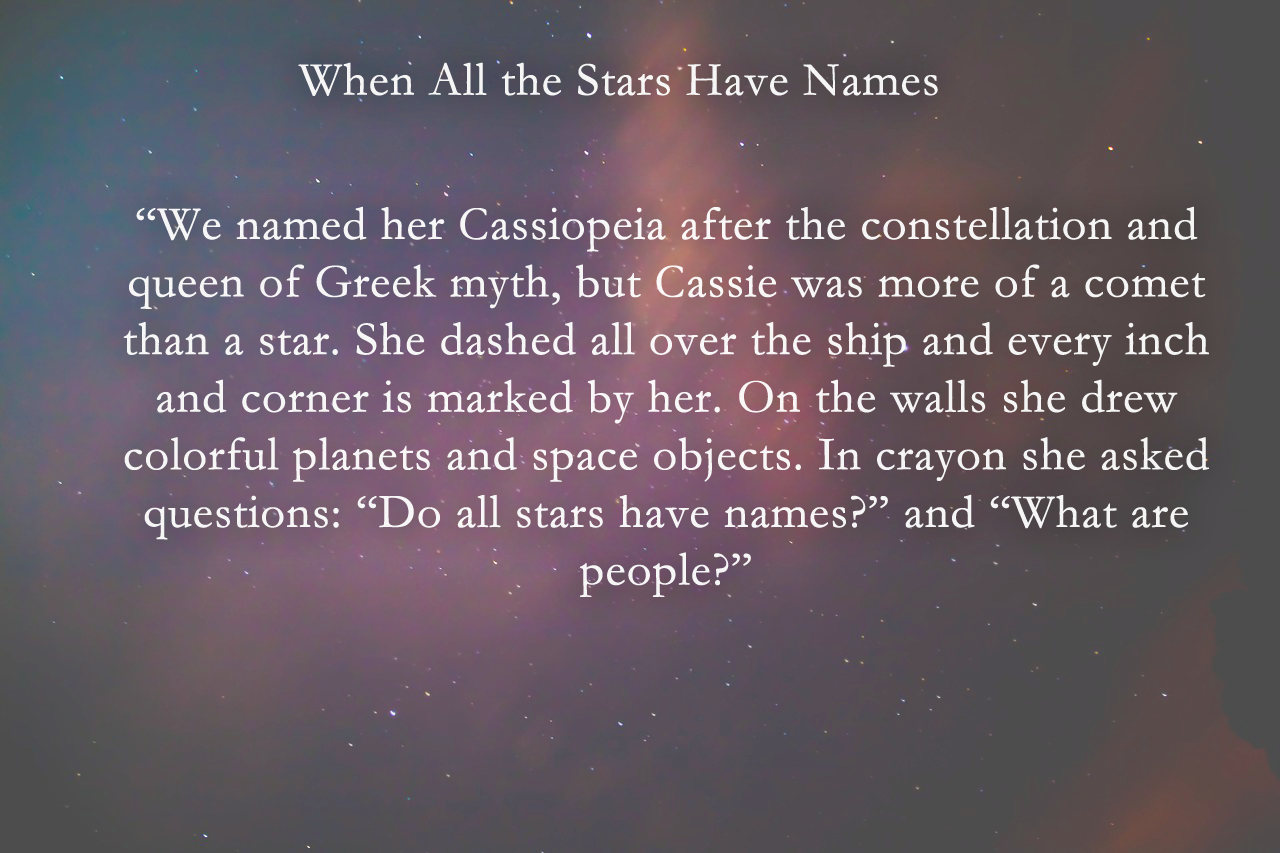 A psychiatrist and his epidemiologist wife travel through space and find more than a cure to the epidemic destroying half of earth’s population.

It’s been so long I think I’ve forgotten what the surface of Earth looks like; that great spinning marble doesn’t belong to me anymore. Despite all the data I process and information I record I don’t like to keep track of the date or how much time has elapsed since we’ve been away. Since I’ve been away.

Actually, the only thing I record manually with any regularity is this journal. The ship is simply a giant super-computer that can record information and process the cure if we should find it. I’m just the backup; thousands of years ago I believe these roles were reversed.

I wonder how many are still alive. I know my family, friends and colleagues are certainly all dead, their grandchildren and great grandchildren as well. The disease causes rapid aging in most, but can do strange things in some. I only hope my family died of old age. I can’t say I entirely regret volunteering for this mission; my wife and I were able to see terrifyingly beautiful things. We’ve seen the hot blue glowing remnants left over by the Seven Sisters; the dispersing star clusters that once lit up the night sky on Earth. We’ve seen other research ships far off their course, abandoned with no trace of the doctors, scientists, and researchers inside. Beyond the Kuiper belt, we watched and held each other as a dwarf planet exploded into a luminous dust of frozen elements and compounds. The ship took pictures and recorded all these events classifying them as space anomalies, not important to our primary objective. We simply watched and at the time they felt pretty important enough for us to remember.

Continue “When All the Stars Have Names” on Scribd here. 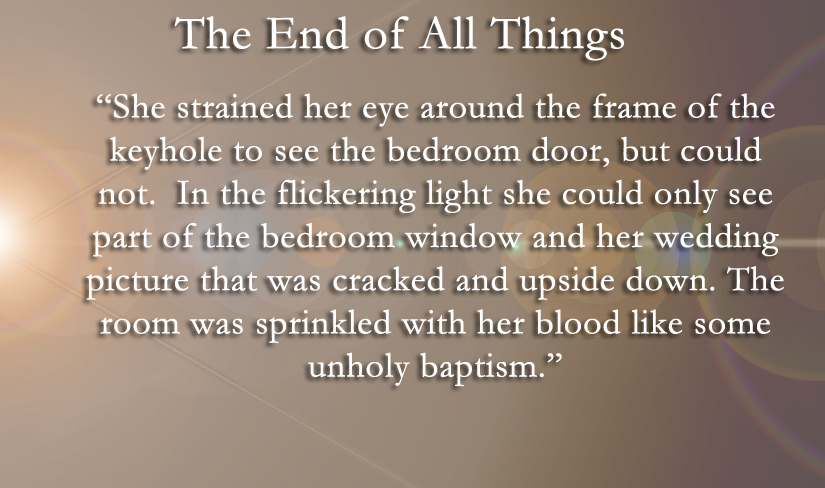 A woman caught in an abusive situation escapes the only way she knows how as she fights for her life.

In the darkness she closed her eyes but the world did not disappear. She opened her eyes and felt the weight of fatigue pull on every muscle. Her hands touched the wound on her head. She feared he would hear the blood drip. She could feel one large drop move through her matted hair and roll warm down her neck. She traced its path down her chest and into her dress as she could hear it dripping on the wood floor. Outside the closet, the flickering lamp sat overturned on the ground and sent scattered light under the crack of the door. She was standing barefoot in a pool of her own blood. Anywhere she went she would leave footprints.

Downstairs she heard the muffled breaking of glass and the frantic turning of knobs. Her husband’s curses echoed sharp like glass breaking in a temple. As she bent down to look through the keyhole she imagined a screwdriver moving its way through the keyhole and into her eye. For a moment she hesitated but realized she needed to know, she needed orientation.

What once was their bedroom was now ancient ruins of a different time, a better time. Outside the mattress was off the bed frame, bloodied pillows were strewn about, picture frames and glass trinkets broken. She strained her eye around the frame of the keyhole to see the bedroom door, but could not. In the flickering light she could only see part of the bedroom window and her wedding picture that was cracked and upside down. The room was sprinkled with her blood like some unholy baptism.

Continue “The End of All Things” on Scribd here. 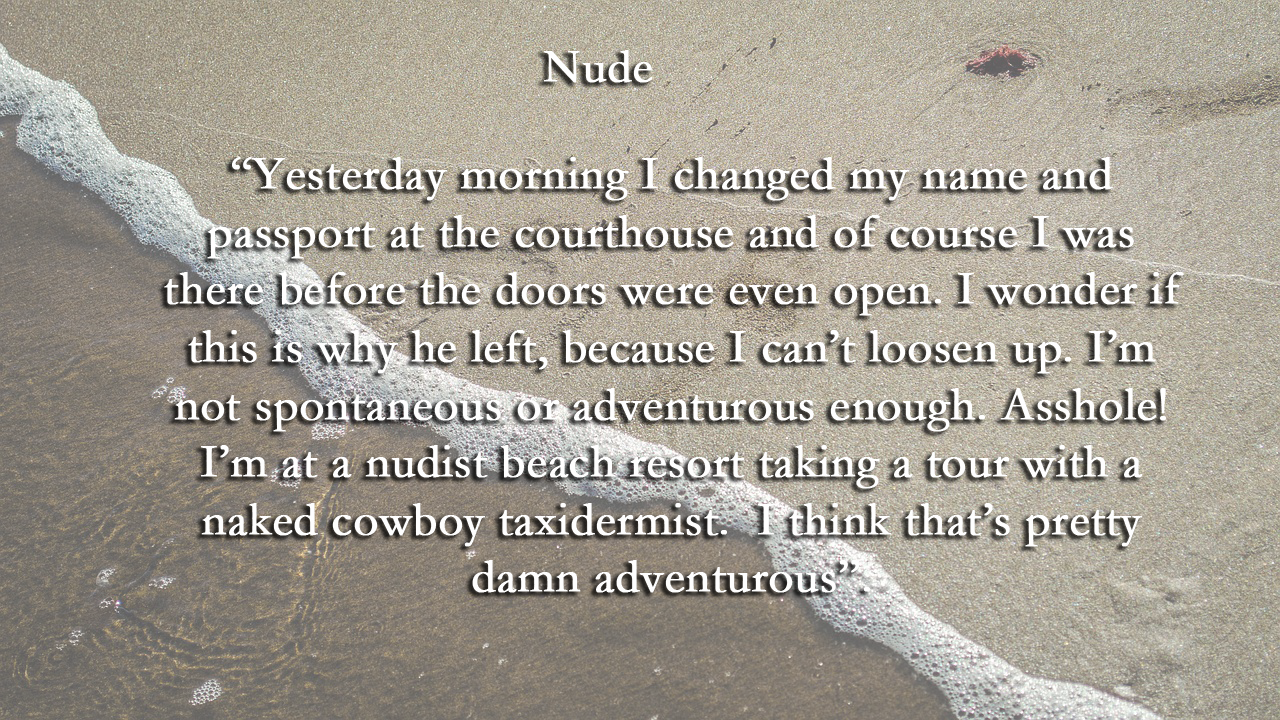 A newly divorced woman must find herself again even if she has to go to a nudist beach to do it.

*NOTE: Mature themes (Salty language, divorce, nudist beach and all the awkwardness that comes with that…)*

Something about the wood paneling on this wall and shag carpet we’re standing on bothers me. I feel like screaming and running back to my car. No, not run, not here. More like a brisk walk. Chuck, my tour guide is not helping.“Yeah, I took a correspondence course in taxidermy about a year ago. The hours appealed to me and no one talks back,” he says. He’s grinning at me like an idiot, pleased with his own joke.

I try to listen to Chuck or at least pretend to listen as best as I can but I feel like a shaved mouse in a clear snake tank. I don’t know if it’s possible for me to feel more naked than I do right now.

“Most of the rooms here have some of my work hanging on the walls. I’m honored to have my buck here in the resort’s office. What do you think of it?” Chuck puffs out his chest and looks up at his buck with genuine pride. I can see him waiting for me to reciprocate with some type of flattery.

I don’t know what bad taxidermy looks like, but I imagine it looks like an animal frozen in some cartoon terror. Chuck’s buck looks like a deer trapped in apathy, its mouth pinched in a look of awkward disinterest, just below asymmetrical eyes. The whole situation was absurd enough in my mind to warrant hysterical laughter. Divorce is absurd enough. Now a man named Chuck is standing in front of me naked except for a cowboy hat and boots asking me what I think of his indifferent cockeyed deer. It was almost too much. I smiled and nodded my head in feigned approval of the mutant buck hanging above the receptionist’s desk.

“So I think we’re gonna hop on the golf cart and I’ll finish the tour at Wunderland’s private beach, Neverland.”

For a moment I don’t register his statement and stand staring into the faded wood paneling on the wall. Why am I even here? I want to do something different, but now as I stand here trying not to look at this man’s swinging penis, I’m starting to think this wasn’t such a good idea. I can just as easily get a thrill standing naked in my living room with the window curtains open.